Literature / The Witches of Eastwick 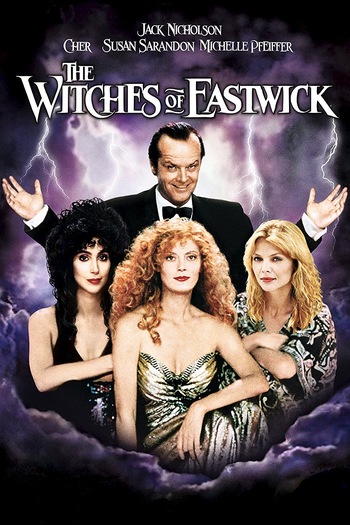 Something wicked this way comes.
Advertisement:

The Witches of Eastwick is a 1984 fantasy novel by John Updike.

Sukie, Jane, and Alexandra — three bored, middle-aged, single women living in the Rhode Island town of Eastwick — have the ability to manifest whatever they desire by thinking about it in concert. One night, while having a get-together, the three discuss their ideas of the perfect man.

The next day, a mysterious stranger named Daryl Van Horne moves into the town's historic Lennox mansion. One by one, he manages to seduce each of the three women, and helps them to realize the full extent of their powers. The four indulge in a hedonistic sexual relationship, as the town busybodies gossip about the immorality of it all. But after the pillar of the community, Felicia Alden, is suddenly and mysteriously murdered by her Henpecked Husband Clyde, the witches begin to realize that the new man in town may be up to no good...

Adapted into a 1987 film (directed by George Miller and starring Jack Nicholson, Cher, Susan Sarandon, and Michelle Pfeiffer), as well as a 2000 stage musical. It also inspired the television series Eastwick and a sequel novel, The Widows of Eastwick.

Not to be confused with Witches of East End.

The musical contains examples of:

The sequel novel contains examples of:

Alternative Title(s): The Witches Of Eastwick