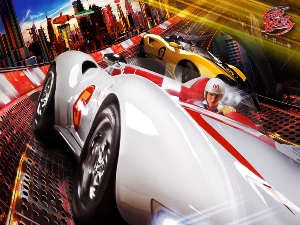 "Ho-Hoa!"
Pops: You think you can drive a car and change the world? It doesn't work like that!
Speed: Maybe not, but it's the only thing I know how to do and I gotta do something.
Advertisement:

Speed Racer is a 2008 film based off of the anime series Speed Racer, directed and written by The Wachowskis. It features the titular Speed Racer (Emile Hirsch) characters with their same basic personalities thrown into a racing world where corporate greed determines everything.

An outrageous visual spectacle, the movie did not attempt to make any apologies for the implausibilities or cliches of the original, instead merely using them to show insane, over-the-top brightly colored race car action sequences.

The film bombed at the box office and was panned upon release, but has since become a Cult Classic in more recent years. It also got a Video Game adaptation, set one year after the events of the film.