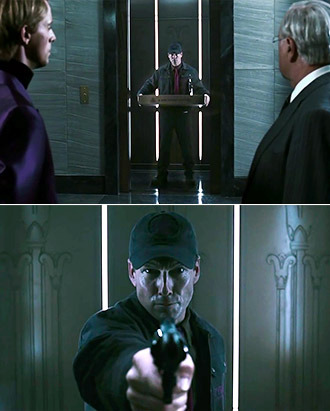 Bonus points if their Pre Ass Kicking One Liner is SPECIAL DELIVERY!!!
Advertisement:

A criminal or terrorist poses as a package courier or mailman to deliver a bomb, or get the target to open the door so he can be shot or kidnapped. The advantages of this are obvious — by insisting that the target sign for the package, the killer can be sure a) the door gets opened for a stranger, and b) he's got the right man. To some extent, this is Truth in Television.

Of course, there is nothing to stop the hero from using this technique too, for non-lethal purposes — see Delivery Guy Infiltration. When the bomb is simply mailed to the target, that's You Got Murder.

See also Room Disservice. An inversion is Shoot the Messenger. Not to be confused with Death by Childbirth, a different type of Deadly Delivery.