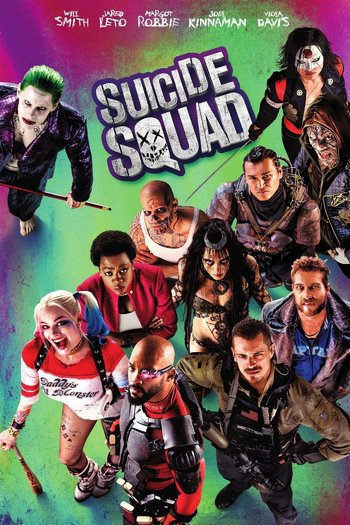 Suicide Squad is a 2016 superhero black comedy movie based off the DC comic books of the same name, directed by David Ayer. It is the third installment in the DC Extended Universe.

The movie revolves around a group of incarcerated supervillains who are recruited into a secret, deniable and expendable government task force led by the ruthless Amanda Waller (Viola Davis) in exchange for reduced sentences, and not having their heads blown off by bombs planted in their necks.

They have to rescue a person (whose identity initially is kept from them) from the evil Enchantress (Cara Delevingne) in Midway City, who has destructed much of the city and magically turned many humans into her Humanoid Abomination mooks. The team is led, and kept on a leash, by Colonel Rick Flag (Joel Kinnaman), who also has a personal interest in this mission since the Enchantress demonically possesses his girlfriend.

Meanwhile, The Joker (Jared Leto), who was in a (very dysfunctional) relationship with Harley Quinn (Margot Robbie) prior to her imprisonment, is executing a plan to rescue Harley during the mission. As they get farther into the city and towards their destination, the Squad goes from a Dysfunction Junction comprised of people each only looking out for their own good, to warming up to each other and forming a bond.

As was the case for Batman v Superman: Dawn of Justice, an Extended Cut of the film is paired with the home video release of the theatrical movie

. The movie won an Academy Award in 2017 for Best Makeup and Hairstyling.

Harley Quinn's story is continued in 2020's Birds of Prey. A follow-up to Suicide Squad, titled The Suicide Squad, was released in August 2021. Not to be confused with a 1935 movie of the same name about firefighters