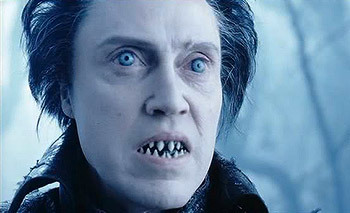 Makoto: Nagisa, [Rin] called you a loser!
Nagisa: Ay yo, homeboy looks like Shark Week, I ain't messin' with that.
— 50% OFF
Advertisement:

A character smiles, and it is revealed that his or her teeth are... disturbing.

This trope manifests in myriad ways, from teeth being all askew to being rotten, from being a mouthful of sharp fangs to metallic prostheses, and sometimes even there not being any teeth at all (cute in an infant, disturbing in an adult).

This trope works for a variety of reasons. One of the biggest is that trauma to the teeth is a Primal Fear for most people. Also, teeth are very much associated with youth, vigor and hygiene, so nasty teeth instantly give an image of sickness, dirtiness and malevolence. Sharp, fanged teeth are an universal identifier of a predator, too, so anyone who sees fangs or a maw full of sharp teeth will instantly feel threatened.

Can be an indicator of an evil character, although good ones aren't disqualified (though even the good characters with teeth like this will typically still have some bestial, brutish traits).

Related to Tombstone Teeth, and Fangs Are Evil. Sub-Trope to Monster Mouth. Super-Trope to both More Teeth than the Osmond Family and Jagged Mouth, where the teeth seem to be rigid extensions of whatever passes for the lips.

Example of:
Mouth of Sauron