Manga / How to Treat a Lady Knight Right 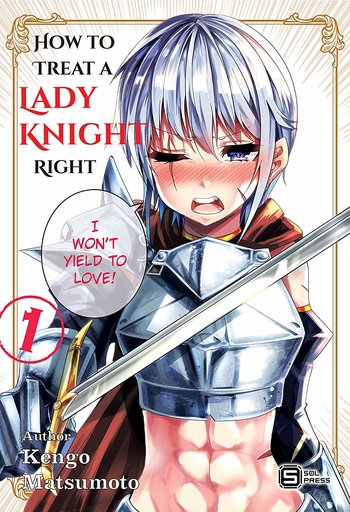 Leo Cornelia is the kingdom's strongest female knight, its Undefeatable Holy Blade. She has trained with the sword from the day she was born. It is no surprise, therefore, that when she encounters the young magician Houli Dent, she's expecting him to challenge her to a duel. What she never expected, what never for even a moment crossed her mind, was that Houli would declare his love for her.

So begins How to Treat a Lady Knight Right (Ima made Ichido mo Onna Atsukaisareta Koto ga nai Jokishi wo Onna Atsukai Suru or "A Story About Treating a Female Knight, Who Has Never Been Treated as a Woman, as a Woman") by Kengo Matsumoto. A fantasy Slice of Life manga in which Leo and Houli develop and understand their feelings with one another, and deal with those who would either see them broken up or pushed together even harder.

The manga was serialized in Suiyoubi no Sirius from 2018 to 2021, and compiled into seven volumes. It has been officially licensed in English by Sol Press.

Has nothing to do with She's My Knight.