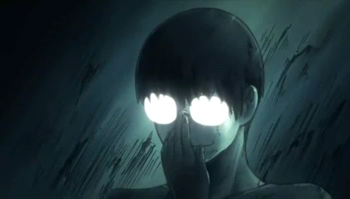 Gendo shifted his head minutely. His glasses flashed at Rei. Backlit by the reflected sunlight from the surface, he was a black shape with only the flash of his lenses to highlight his form. He was like a perched demon, sitting in judgement.
— Advice and Trust
Advertisement:

These are definitely not mere Nerd Glasses, although they are sometimes mistaken for them at first. This is a variant of The Faceless.

Traditionally, one's eyes are an indicator of one's character. Large eyes represent honesty and innocence, while smaller eyes indicate darker personalities. This is because eyes are very important to conveying emotions.

If you can't even see their eyes because of light reflecting off their glasses, beware — for these are individuals who deliberately wall themselves off from the people around them. If the symbolism is particularly ham-handed, you can even expect the glasses to be non-prescription lenses, easy to break or take off during a moment of epiphany — or death.

The Scary Shiny Glasses can be turned on or off at will by the wearer; they can especially crank it up for intimidation. When they are in effect, the glasses reflect light such that all you can see are two white circles, nothing is visible of the eyes. Often for extra effect their bodies will just be a black outline, with the glasses as the only visible detail.

People with Scary Shiny Glasses never have The Glasses Come Off for just fights. A single flash of the glasses can represent a sudden increase of intention, but to really be Scary Shiny Glasses they need to have an even, creepy glow. A variation is to have the glow complete on one lens, but just a flash or not there at all on the other, allowing the audience to see just how sinister the character is being behind his eyepiece.

Sometimes the glasses are a visual metaphor for the bearer's inhumane qualities. Other times the possessor is Not Even Human.

The shades worn by The Men in Black are a lesser variant; see Sinister Shades. Characters with Four Eyes, Zero Soul are prone to this. Character Tics involving adjusting one's glasses — particularly by pushing them up the nose — has an alarming tendency to trigger this trope. Compare Malevolent Masked Men and Opaque Lenses. Can also be combined with a High-Class Glass for use by a Nazi Nobleman or Evil Aristocrat.

The Incubi all wear glasses behind their screens; when they remove the screens in preparation for a fight, the lenses of their glasses actually *glow* in the dark.

The Incubi all wear glasses behind their screens; when they remove the screens in preparation for a fight, the lenses of their glasses actually *glow* in the dark.