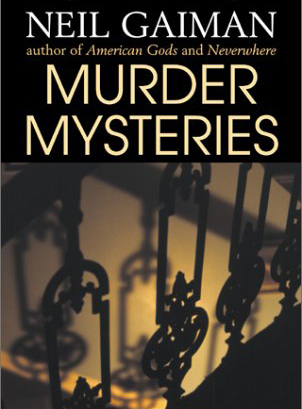 Murder Mysteries is a short story by Neil Gaiman which was adapted first into an audio drama for the Sci Fi Channel website's Seeing Ear Theatre and then into a Dark Horse graphic novel illustrated by P. Craig Russell.

The story is divided into two main layers. The first is a framing narrative that focuses on a British man (the narrator) remembering his younger years when he was stuck in Los Angeles while trying to get back home. During his stopover, he briefly hooks up with an old flame named Tink, and after leaving her apartment he meets an older man who tells him a story in exchange for some cigarettes. The older man tells the narrator of when he was the angel Raguel, the embodiment of God's vengeance, and of his investigation of the first murder in the history of existence after the body of another angel, Carasel, was discovered dead in the Silver City. Along the way, he interacts with several other members of the divine hierarchy, including a pre-fallen Lucifer.

The conclusion of the story is, not too surprising for Neil, a bit of a Mind Screw. The ending can be interpreted in different ways, and Gaiman himself provides an answer (see below), but it's hard to pin things down definitively.