Literature / The Man Who Was Thursday 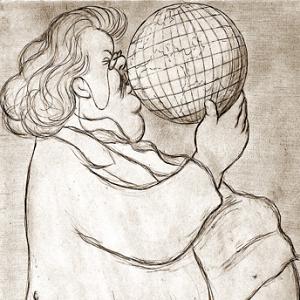 "Each man of you finds Sunday quite different, yet each man of you can only find one thing to compare him to — the universe itself."
"First of all, what is it really all about? What is it you object to? You want to abolish Government?"

"To abolish God!" said Gregory, opening the eyes of a fanatic. "We do not only want to upset a few despotisms and police regulations; that sort of anarchism does exist, but it is a mere branch of the Nonconformists. We dig deeper and we blow you higher. We wish to deny all those arbitrary distinctions of vice and virtue, honour and treachery, upon which mere rebels base themselves. The silly sentimentalists of The French Revolution talked of the Rights of Man! We hate Rights as we hate Wrongs. We have abolished Right and Wrong."

"And Right and Left," said Syme with a simple eagerness, "I hope you will abolish them too. They are much more troublesome to me."
Advertisement:

The Man Who Was Thursday: A Nightmare is a metaphysical thriller by famed author G. K. Chesterton, and stands alongside his Father Brown stories as his most famous work.

The story concerns special detective Gabriel Syme, a member of a secret police force dedicated to fighting the forces of Anarchy, who encounters a self-professed anarchist poet by the name of Lucian Gregory. After a spirited debate on the subject of Order Versus Chaos, Gregory invites Syme to a secret meeting of the anarchist force to which he belongs. There, Syme manages to get himself elected as the new Thursday on the anarchists' supreme council, the Council of Days, where each member is named for a different day of the week, in order to penetrate the anarchist organization and bring it down. The council is led by the terrifyingly cheerful and enigmatic figure of Sunday, and what follows is Syme's attempt to stay sane in the face of what seems to be true evil, and to answer the maddening question: "Who is Sunday?"

The book deals with the conflict of Order and Chaos, and serves to deconstruct the concept of the Bomb Throwing Anarchist (which was popular at the time) in favour of dealing with philosophical anarchism, that Chesterton felt to be actual nihilism that seeks to abolish not just government and authority, but the very concepts of good, evil, and God. It contains elements of the spy novel, Mystery Fiction, satire, Magical Realism, humour, and horror, and has also had a rather eclectic variety of fans in the literary world, including Michael Collins, Jorge Luis Borges, and Franz Kafka.

An adaptation starring Francois Arnaud, Ana Ularu, and Jordi Molia was released in 2016 to critical acclaim.

You can read it online here

"Put him in a pair of smoked spectacles... and you give even that honest angel a visage that would make a child scream."