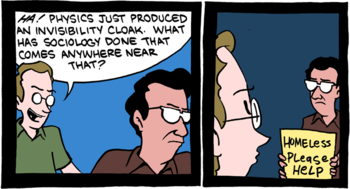 Alejandro: We're never going to get away with this. What will you do if Montero recognizes you?
Diego: Montero considers himself a true nobleman. He would never look a servant in the eye.
— The Mask of Zorro
Advertisement:

One way for a character to evade detection from someone who is looking for them is to disguise themselves, not in a highly elaborate way, but rather as an incredibly plain, ordinary-looking person who isn't worthy of attention. The idea behind such subterfuge is that even if an authority figure comes looking around, they wouldn't demean themselves by looking a commoner straight in the face. Blending into your environment works for chameleons, after all, so why shouldn't it work for humans, too?

This trope appears in many settings with its use generally depending on the values of the time period. In a class-stratified society, it is literally unthinkable for an aristocrat to even consider pretending to be a commoner simply for the sake of honor, so the idea never even occurs to anybody to look for a commoner. Contrast a modern setting, where rather than a whole underclass, usually certain peripheral professions will be utilized for this. In either case, the Selective Obliviousness of characters can become a plot point if a character declares that Everyone Is a Suspect in hope of keeping others from failing to notice those usually Beneath Notice.

This is how The Butler Did It became such an attractive trope for mysteries that it became an utter cliché: Nobody notices the butler, and he's usually the most trusted member of the household help.

The Nondescript may be this. May result in The Dog Was the Mastermind. Related to They Look Just Like Everyone Else! and Janitor Impersonation Infiltration. Beneath Suspicion is a subtrope, but should not be confused with this trope. Flaw Exploitation and Batman Gambit are supertropes, as successfully pulling this off depends on exploiting the pride of the one being evaded. See also Hidden in Plain Sight, Room Disservice and Bathroom Search Excuse.

Alternative Title(s): Beneath Their Notice