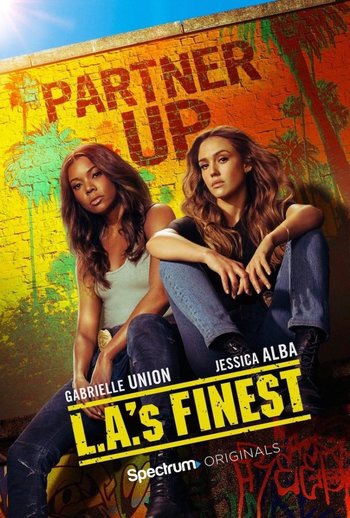 L.A.'s Finest is a Spin-Off series from the Bad Boys films, with Gabrielle Union reprising the role of Syd Burnett from Bad Boys II, with Syd having been transferred to the LAPD. Jessica Alba plays Syd's partner Nancy McKenna.

The show started in 2019, and was cancelled in 2020. It was the first series created for Spectrum Originals, a streaming service available to Spectrum Cable subscribers; months after its premiere there, it had a brief run on Fox to fill a COVID-created hole in their schedule.

Syd: Wow. You just hit me with, like, the angsty teenage girl, "Nothing". Like. "Hey, what are you two doing up in your room with the door closed?" - "Nothing." What's up?
Nancy: What WERE you doing upstairs with the door closed, Sydney Gayle Burnett?
Syd: Don't use my middle name and don't change the subject.
Nancy: You're not the boss of me.