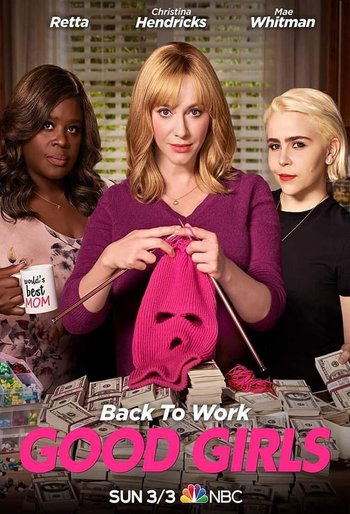 Beth Boland wants to be independent of her philandering car dealer husband Dean. But she has four kids and a house with him. And due to his being, if anything, a worse businessman than he is a husband, she's buried under a mountain of debt with him.

Ruby Hill's daughter Sara suffers from a kidney ailment. With treatment she and her husband hope that Sara can recover. But the most effective treatment costs money, more money than the Hills have or can realistically gather together.

Annie Marks is Beth's younger sister and loving mother to the quirky Ben. Her ex-husband Gregg and his second wife are suing for full custody. To fight them she needs - you guessed it! - money, which is in short supply as she works a minimum wage grocery store cashier job.

The three hit upon the idea to rob the store where Annie works, which they expect to have about $30,000 on-hand. They empty the safe and return home to find themselves in possession of half a million. Bad news, since that haul comes from shady sources, namely the tattooed Rio and his gang. Initially Rio demands that they pay back the money with interest or face predictable consequences. When he seems about to make good on his threat, Beth calls him an idiot and points out that the three of them are normal, previously law-abiding people, and their deaths would make more of a splash than Rio is accustomed to. He spares their life but comes back with a business proposal. Also complicating matters is the fact that Annie's disgusting boss Boomer knows what they did.