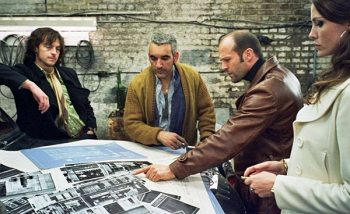 "Remember: You're only supposed to blow the bloody doors off!"
Advertisement:

Told from the criminal viewpoint, a group plans and executes an elaborate crime. The criminals are usually more rounded than the opposition, or at least more colorful. When the crime is a robbery, the plot is called a "heist."

The Caper is more action-oriented than The Con. It often revolves around a brilliant Gentleman Thief who Just Got Out of Jail hoping to do One Last Job, usually by Putting the Band Back Together (in comedies, a Ragtag Bunch of Misfits). However, almost any type of protagonist can be found planning a caper, often out of necessity when their usual methods won't work or aren't available. If one or more of the crew works for the target, it's an Inside Job. Can lead to Just Like Robin Hood as a way of Caper Rationalization. The crew's leader will inevitably present the job as A Simple Plan that is certain to go off the rails due to unexpected variables.

The members of a Caper Crew fall into standard roles. For targets, see Bank Robbery, Armed Blag, The Casino, Train Job. See also Impossible Mission, The Infiltration and Double Caper. Not to be confused with The Cape. Can contain an A-Team Montage or Avengers Assemble sequence. Heist Episode is for when works that are normally not about thievery pay homage to the Caper genre for an installment, usually by having the characters steal something.

Not to be confused with the webseries Caper. One of the reasons heist films may be so popular is that conceptually, pulling off a heist and making a movie are pretty much the same thing.