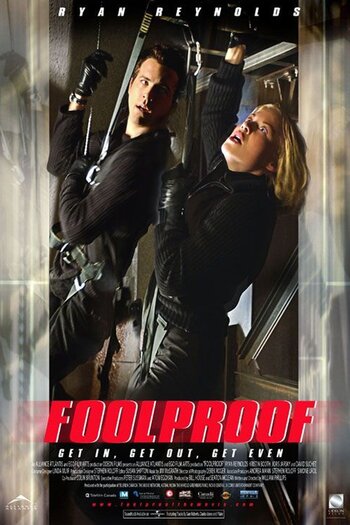 Foolproof is a 2003 Ryan Reynolds heist-comedy following a trio of young adults who make plans for perfect crimes as a hobby. A real criminal (David Suchet) steals their handbook, uses it to pull a heist, and then blackmails the trio into helping him with a second theft.

The film received a considerable amount of attention in 2020 when Reynolds himself used it as part of a promotional campaign for his cell phone service Mint Mobile, offering it for free (specifically, through a copy provided by Filmrise) for a period of time through a "new" free streaming service named Mint Mobile+... the joke being that the film was the only program you could stream there, no matter which thumbnail (and there were several, all with different designs, but with the same name) you chose. This was undoubtedly a troll move by Reynolds to mock the sudden onslaught of new streaming services around that time; shortly thereafter, it was taken down, citing they were "confused" as to what audiences wanted and taking the advantage to promote the cell service once more.