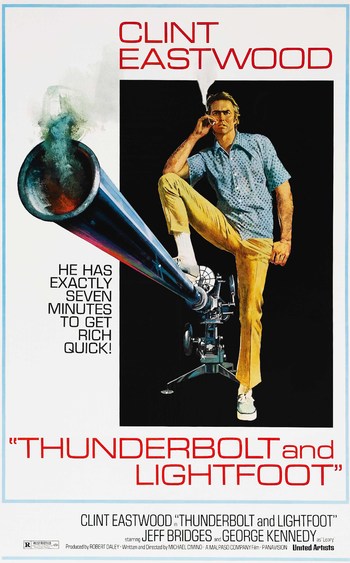 At a small church in rural Montana, a preacher (Clint Eastwood) is conducting a Sunday service when a man comes in and starts shooting at him. He escapes, with the aid of Lightfoot (Jeff Bridges), a car thief who happens to be driving by and helps him by running over his pursuer and giving him a lift.

Lightfoot discovers that the preacher is really one of the members of a gang who had robbed a security company a few years ago and were never caught, and that he had the nickname "Thunderbolt". After the two of them stop for ice cream, the remaining members of the robbery gang pursuing Thunderbolt – the vicious Red Leary (George Kennedy) and Gentle Giant Eddie Goody (Geoffrey Lewis) – catch up, and demand their share of the money from the robbery. Thunderbolt explains that the loot was hidden inside a one-room schoolhouse, but the building has disappeared and the other member of the team who knew about it is dead. Lightfoot offers a suggestion: pull off the same robbery of the same company all over again, because nobody will ever be expecting it.

The four of them plan out the robbery, including timing the police for how long they'd get there, getting the outer safe combination from the security company manager, preventing the telegraph operator from being able to warn the police when the silent alarm rings there, then two of them sneaking into a drive-in next door to the security company by hiding in the trunk along with the money after they rob the security company, while just Thunderbolt and Lightfoot (dressed as a woman) apparently ride into the theatre.

The police show up shortly after the robbery, and because Red sneezes and a shirt was showing from the trunk of the car, the drive-in cashier figures they were sneaking people into the theatre and the police are directed to them. They escape, but in the process Goody (in the trunk) is shot by the police. Red dumps the dying man out, crawls into the passenger area through the back seat hatch, and takes over the car at gunpoint. He pistol-whips the other men and kicks Lightfoot in the head because he doesn't like him, and drives away...straight into a police roadblock. They shoot him, he crashes into the department store where he worked as a cover and is mauled by the junkyard dogs the store has in the building overnight to keep out burglars.

Thunderbolt and Lightfoot hitchhike out of town, then discover a one-room schoolhouse. The building had been moved, intact, a year earlier. They take the blackboard off the wall, and find the money from the original robbery, just as it had been hidden. Cut to a scene where Thunderbolt is driving out of a dealer with a brand new Cadillac convertible, picks up Lightfoot, and they drive off to see what's over the next mountain...

...only the beating Lightfoot took from Red caused some sort of brain trauma, and he collapses into the passenger seat, dead. Thunderbolt, even though he got away with the money, is unhappy at the death of his friend as he continues driving down the road.

While only a moderate box office success, this 1974 action-comedy film was critically adored, and allowed its writer/director Michael Cimino the clout to make his next movie, The Deer Hunter. Jeff Bridges was nominated for an Academy Award for Best Supporting Actor for his role; Eastwood's performance was also highly praised, and he believed he also deserved an Oscar nom, though none came. Clint blamed the relative failure of this film (compared to his other pictures of the time) on United Artists' poor marketing. Though this was meant to be the first in a multi-picture deal with the company, Eastwood soon went back to Warner Bros. and never made another film for UA.