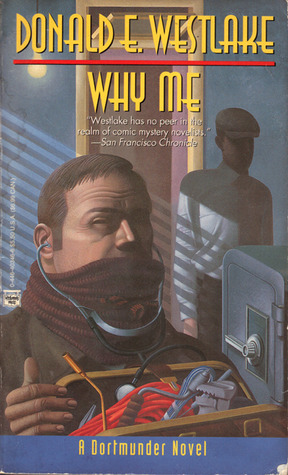 John Archibald Dortmunder is a fictional character created by Donald Westlake, and who is the protagonist of 14 comic novels and 11 short stories published between 1970 and 2009. He first appeared in the novel The Hot Rock, published in 1970.

Dortmunder is a career criminal and a planner; creating schemes for burglaries, assembling a team, and assigning responsibilities. However, Dortmunder's schemes never run as smoothly as he would like them to, and almost always dissolve into a Plethora of Mistakes, followed by Crime After Crime as Dortmunder and his crew have to commit a succession of different crimes while attempting to achieve their original goal (if they haven't lost sight of the original goal altogether).

The fact that something almost always goes wrong with Dortmunder's jobs, in spite of careful planning, has given him the reputation of being jinxed — and despite claiming not to be superstitious, Dortmunder has believed so, too. In fact, Dortmunder gets worried when things go smoothly and seems relieved when something does go wrong. In most novels, Dortmunder's team earn only small amounts of money; the resultant heists, therefore, are only Pyrrhic victories, and the moral for the reader is that Crime Does Not Pay ... at least not very well. However, Dortmunder is not always unlucky, and in some novels and stories he and his crew make out quite well.

The works in the Dortmunder series are:

Tropes in the Dortmunder series: