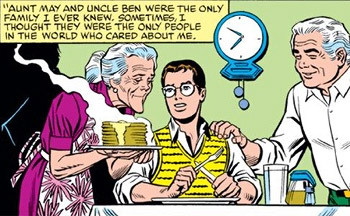 "As far as I know, Peter Parker doesn't even have a mother; he was merely created spontaneously when Aunt May and Uncle Ben came down with nephewism, a common affliction in fictional characters."
— The Comics Curmudgeonnote In the comic books, of course, Peter's parents Richard and Mary are known and have a rich backstory (see the Comic Book folder for details), but Josh is firm about trying to understand Newspaper Spider-Man with as little previous knowledge of the source material as possible.
Advertisement:

So Bob's parents aren't around. What happened to them? You tell me. What happens to Bob? He lives with his aunt and/or uncle, of course. Sometimes a cousin or two will be thrown into the mix. This trope, nephewism (coined by Josh Fruhlinger of The Comics Curmudgeon) usually occurs when a character's parents are completely absent (as in, not part of the story in any way), missing, secretly the Big Bad, or established as dead.

It's an easy way to graft characters to an already-existing dramatic family, and to give your old characters (and hence the viewers) an emotional attachment to them. The advantage for the writer might be that one's expected to be more distant from aunts, uncles, nieces, and nephews than it is from parents and children. It also lets them avoid having to depict a youthful protagonist with secrets as constantly lying to their actual parents about what they've been doing on the sly.

If it's a sitcom, expect the new addition to be a Cousin Oliver. If it's used in a soap-opera setting, expect the niece or nephew to be a Troubled, but Cute teen, who can stir things up without breaking any existing characterizations. If it's an adventure story, expect the aunt/uncle to be keeping secrets about the parents, or who/what their niece/nephew really is. Also expect them to die fairly early on in the story to get the hero motivated.

And speaking of adventure stories, if Bob has special powers to be used in his upcoming adventure, then his aunt and/or uncle may also be his Muggle Foster Parents.

This trope can also be used in reverse, to apply to a person besieged with nieces and nephews in their life. In these cases, it is often used to allow plots in which canonically single characters fulfill a parental role without significantly changing their character. Strangely enough, nephews in these situations often look and act like clones of their uncles, in defiance of everything we know about heredity.

A frequent useful side-effect of Nephewism in comedic series is that said Nephew can vanish back into Unseen Nephewspace without explanation when the presence of a child is no longer needed, or becomes otherwise undesirable (say, an episode about the protagonist going on a "Hot Date", or going on an adventure without them).

The non-animated cousin of Chaste Toons. Compare Raised by Grandparents (same trope but with a different relative) and Promotion to Parent (which is where an older sibling acts as a parental figure to their younger sibling).

Not to be confused with Nepotism.note Which comes from the Latin word that can mean "grandson", "nephew" or "descendant" and originally referred to the practice of Medieval Popes favoring their close relatives (including nephews, or "nephews") in their appointments.