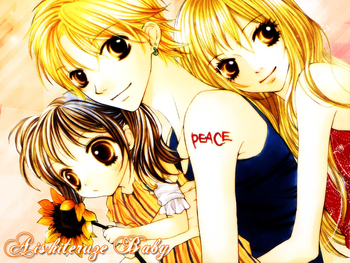 Aishiteruze Baby is a 2002-05 Shōjo manga published in Ribon written by Yoko Maki. It received a 26 episode anime adaptation by TMS Entertainment in 2004.

Kippei Katakura is a lazy high-school playboy. He returns home one day to find that his sister has charged him with the upbringing of his five year old cousin Yuzuyu; this is because Miyako, Yuzuyu's mother, couldn't stand the stress of raising her as a single parent and (at least temporarily) can't handle being around Yuzuyu. Kippei then takes up the task with great gusto, and the series deals with his character development as he cares for Yuzuyu.

The series alternates between Yuzuyu at pre-school, Kippei at high school, and their life together at home, and is chock full of heartwarming moments.