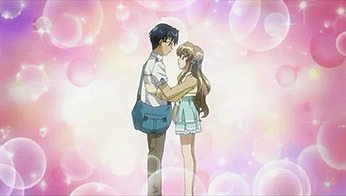 Momoko: Shojo bubbles? This can only mean that he's a good guy.
Pluie: OMG, that ring is fabulous! It must be mine!
Momoko: What? The bubbles... lied to me?
— Wedding Peach Abridged
Advertisement:

A romantic moment in anime is often accompanied by a pastel background with lots of bubbles. Nobody knows who wanders into all these series with an invisible bubble machine, but maybe they should stop before they get soap in somebody's eye...

This is a technique taken directly from manga, and often accompanied by a Bishie Sparkle for one or both of the characters involved.

Alternately, the background may have a floral pattern rather than a bubble pattern. In yuri manga, the flowers may be lilies, because yuri literally means "lily". Roses are common otherwise, although any kind of flowers may be used, at the artist's whim, including odd things like passionflowers and clematis.

The origins of this are fairly obscure; as some of the examples below illustrate, it's been around for at least half a century and examples can be found dating back to Osamu Tezuka's post-war contemporaries, making it nearly as old as World War II. Examples in older Japanese popular art, though, tend to be harder to find, not aided by the significant destruction of such works, particularly potential immediate predecessors, in the war. The inspiration for the idea seems to come from the concept of one's vision blurring when you see someone you care deeply for and the human tendency to focus only on them - though who "invented" the trope is a fact probably lost to history.