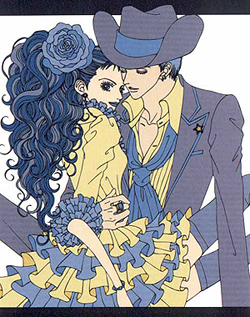 Paradise Kiss is a 5 volume Josei manga series by Ai Yazawa (of Nana fame) that ran in Zipper magazine from 2000 to 2004. It's a sequel of sorts to her previous work Gokinjo Monogatari, with several characters from it making appearances and being relatives of the cast, but it can be read as stand-alone and has in fact been published in countries where Gokinjo has not been released.

It tells the story of Yukari Hayasaka, a high school senior whose life revolves solely around her studies and her upcoming university entrance exams. That is, until she meets punk rocker Arashi and stylish lady Isabella, who accost her and ask her to model the dress they're working on for the upcoming fashion show of their arts high school. They proceed to kidnap take her to the Atelier, where she meets sweet and lovely Miwako and charismatic and handsome George, fashion designer extraordinaire in the making. Together, they form the Paradise Kiss ensemble. This chance encounter shakes her dull and monotonous life, and thrusts her into a self-discovery journey and a passionate and rocky romance with George.

Overall, it's an unconventional Josei manga with a cast of unusual characters, with the world of alternative fashion as a backdrop.

The series was adapted into a 12 episode anime series in 2005, which proved an excellent excuse for Yazawa to design a heap of all new outfits for the characters (Note that it lacks the manga's habit of having the characters share their knowing insights with the reader). A live-action film was released in June 2011.