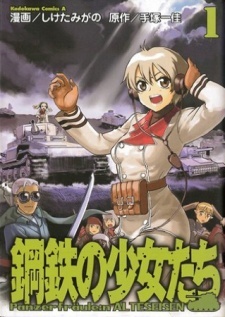 The story is set in another world, where the Kingdom (which is not The Good Kingdom) is fighting a hopeless war against the powerful Federation. In order to change the tide, the Kingdom deploys its Wölfin tank, which is still relatively new. However, because of the small size of the tank, its crew has to consist of young girls. These newly-conscripted green units are then mocked as Iron scraps for their lack of training. The story focuses on the everyday life (and more often than not, struggle for sheer survival) of one such unit.

Although categorized as a Shōnen manga, the story has no heroes, and most of the manga depicts the everyday life of the titular girls and the the harsh battles they find themselves in. It also depicts a lot of gruesome deaths and injuries on the battlefield, as well as atrocities committed by both sides in the war.

Not to be confused with the happier Girls und Panzer, even though they share the same character design.