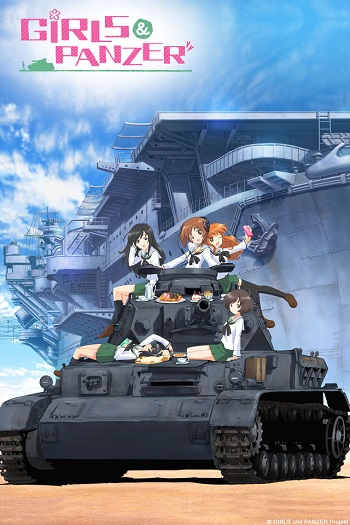 This is a show about girls and their panzers. What else did you expect?note Pictured above: Anglerfish Team having tea on top of their Panzerkampfwagen IV Ausführung D. Clockwise from top left: Hana Isuzu (gunner), Miho Nishizumi (commander), Saori Takebe (radio operator), Yukari Akiyama (loader), and Mako Reizei (driver). In the background: The schoolship of Ōarai Girls' Academy.
"Panzer Vor!"note means Panzer Vor (Actually, means "tanks forward" in German).
Advertisement:

In Real Life, certain Japanese martial arts are considered highly compatible with traditional womanly ideals, including kyuudou and naginatajutsu. In this show, one of those martial arts is sensha-do — the "Way of the Tank".note Or "Tankery" in the english dub. Or "Panzerfahren" in some promotional materials.

Miho Nishizumi is a young scion of a legendary Sensha-do family who, due to a past trauma, has become reluctant to pilot tanks and transferred away from Kuromorimine Women's College, where her family has made a name, into Ōarai Girls' Academy, a little-known school ship docked in a little town of the same name, which has not fielded a Sensha-do team for the last twenty years. As fate would have it, the Student Council decided to take advantage of the buildup to the upcoming National Sensha-do Championships to revive their Sensha-do elective... and push Miho into leading Ōarai's first Sensha-do class in two decades, whether she likes it or not.

Fortunately, she has new friends who are more than willing to help — boy-chasing Saori Takebe, gentle Hana Isuzu, tank fangirl Yukari Akiyama, and lethargic Mako Reizei. Together with them and a crew of over two dozen girls — including the Student Council, members of the recently-disbanded volleyball team, history buffs, and a group of freshmen (later, members of public morals committee and automotive club, and a group of online gamers) — Miho will have to learn to love her sport once more and lead Ōarai to victory — because, as she will eventually learn, there's more at stake than just the school's prestige or her reputation.

Girls und Panzer, animated by Actas (Of Transformers Armada/Transformers Energon, Yutori-chan and éX-Driver fame) with CGI by Graphinica, is an Anime First series that ran as part of the Fall 2012 Anime lineup. Expected to only be a niche anime, it has turned out to be the sleeper hit of 2012 and was a consistent Top 5 performer in Japan. Viewers in the United States, Canada, the United Kingdom, Ireland, Australia, New Zealand, the Netherlands, Scandinavia and South Africa can watch it legally on Crunchyroll

. It is also availble on Hi Dive (Invluding the OVAs and thr Movie) and on Netflix, off and on. Due to various unforeseen circumstances, the last two episodes didn't air until March, during the Spring 2013 season. An official North American home video release occurred on December 3, 2013, with the OVAs released a few months later on Febuary 25th, 2014, along with an English Language Trailer

In spite of the Troubled Production, Girls und Panzer has turned into a multi-media juggernaut. Besides the anime, it also has print-media tie-ins, specifically in the form of several manga (prequel, adaptation and various spinoffs, a total of 11 as of this writing), a Light Novel adaptation (with art by Shimada Humikane of Strike Witches fame), multiple OVAs, a movie, and also video games, tie-ins to other video games, and even a pachinko game. Both the main manga and light novel tell the same story, except with different viewpoint characters: Yukari and Saori, respectively.

Don't confuse it with Panzer Fraulein Alteseisen from the same character design artist. Also don't confuse it with Tank Girl or Tank Vixens either, you'll be happier. For the spiritual ancestors of this anime, see Moeyo! Sensha Gakkou,note "Moe Tank School" and Sailor-fuku to Jūsenshanote "Sailor Suits and Heavy Tanks" both of which were drawn by Girls und Panzer's character designer. High School Fleet is a similar show from the same screenwriter about high schoolers operating war craft (Navy ships in this case). The Magnificent Kotobuki completes the World War II equipment Military Moe (Japanese planes in this case), from the same director.

open/close all folders
A to E
F to J
K to O
P to S
T to Z
Panzer halt.