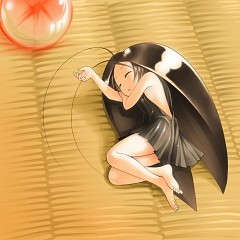 Gokicha (Cockroach Girls) chronicles the adventures of the title character, a cockroach who moved to Hokkaido from Kanto in order to make friends with humans. Unfortunately, while the audience sees Gokicha as a cute cockroach girl, the humans around her see her as, well, an actual cockroach, and react accordingly. During her misadventures, she gets in all sorts of trouble and meets a few recurring characters.

Gokicha began as a couple of doujin in 2009 as Gokiburi Gijinka, before getting serialized as a monthly 4-koma in Manga Time Kirara Carat from 2011 to 2016. In September 2012, a web animation aired on Nico Nico Douga as Gokicha!! Cockroach Girls with two episodes.