Had the Silly Thing in Reverse 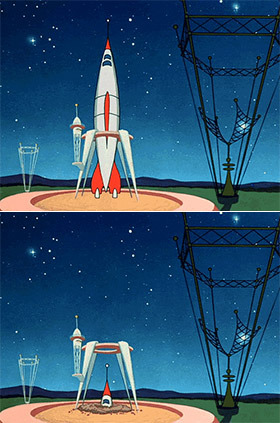 "Have you ever pulled just a little too far into an intersection, so you put the car in reverse and back up just a little bit, and you forget the car is in reverse? You are truly an accident waiting to happen."
— George Carlin
Advertisement:

A device or technique is used... in reverse. Commonly, it is setting a car to reverse.

In comedies, or a comedic moment anyway, a new driver will pull forward, only it's in reverse. Conversely, they may put the car in gear as if it's in reverse, look behind themselves, and then drive forward.

Often a Sub-Trope of Driving Stick. Compare this to Backwards-Firing Gun for a more lethal way to do something wrong. See also Wiper Start, for more comedic driver incompetence, Reverse Polarity, Reverse Telescopic Vision, Read the Map Upside Down, and Aerosol Spray Backfire.