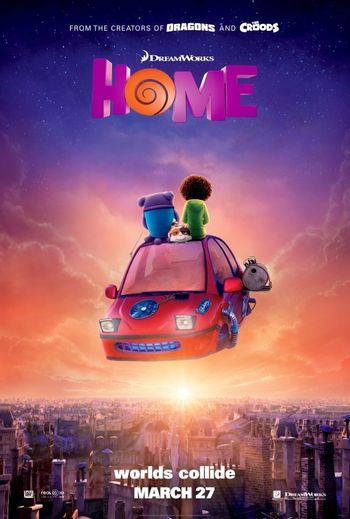 Home is a 2015 computer-animated feature film from DreamWorks Animation directed by Tim Johnson, based on the 2007 children's book The True Meaning of Smekday by Adam Rex. The film is about an endearing but inept race of aliens called the Boov who invade Earth in order to take cover from their alien enemies and move the human race to Australia to live in pre-fabricated cities while the Boov take the rest of the world. After one hapless Boov accidentally transmits the Boov's location, he goes on the run from the rest of the Boov and runs into a young Human girl called Tip who's searching for her mother. A short film Almost Home was released in front of both Mr. Peabody & Sherman and Rio 2, detailing the events before the start of the movie proper.

Despite receiving mixed reviews from critics, the film was warmly received by the general public. The film became a box office success, grossing $386 million worldwide against its $135 million budget.

Here is the first official trailer

Not to be confused with any of these other works also titled "Home".

Example of:
Bizarre Beverage Use