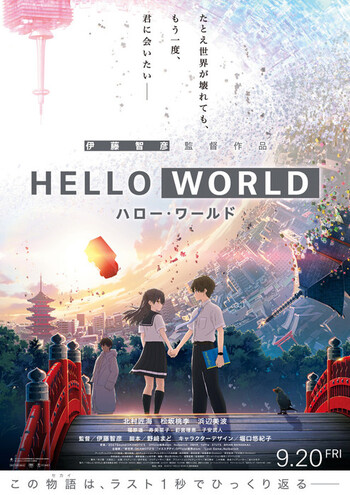 Hello World (ハロー・ワールド) is a 2019 Japanese science fiction and romantic drama animated feature film directed by Tomohiko Itou (ERASED, Occult Academy, the first two seasons of Sword Art Online) and produced by Graphinica. It was released in Japan on September 20, 2019, with subbed releases in Southeast Asia in the following weeks. Whether an English dub will be released for the European and North American markets remains unknown, but given that the home releases came out on April 8, 2020, such hopes are looking increasingly unlikely.

Naomi Katagaki is a shy, bookish Japanese high schooler living in Kyoto in 2027. Nothing in his life prepares him for how, chasing a Crow that stole his book, he comes into contact with an older man who claims to be himself from 10 years in the future and reveals that the world the younger Naomi knows is really a simulation run on the ALLTALE computer system built to preserve Kyoto's history.

A short time in the future, Naomi will fall in love with his hitherto cold, unapproachable classmate Ruri Ichigyou, only for the budding romance to come to an abrupt halt due to a lightning strike during a festival. The older Naomi has come back to the past in an attempt to avert that fate and give an instance of himself the happiness he could never have.

Gifted the older Naomi's foreknowledge and a matter-manipulating glove called the "Hand of God", the younger Naomi must save Ruri from the impending disaster. ALLTALE is no mere passive player back of the past, however, and its homeostatic system will not tolerate this interference; the younger Naomi has his work cut out for him.