Go Out with a Smile 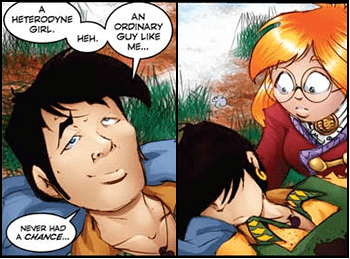 "...he was found in the morning stretched upon the floor, with a placid smile upon his face, as though he had been able in his dying moments to look back upon a useful life, and on work well done."
— Sherlock Holmes, A Study in Scarlet
Advertisement:

Death is rarely a cause for celebration, as it is a permanent goodbye to the world you love.

Sometimes, however, the pain of seeing you cry hurts the one who is about to depart more than imminent death itself, and in spite of agonizing pain or being crippled beyond saving, summons up all their courage to sincerely smile one last time for you (or alternatively laughing softly); a final gesture that beyond all doubt affirms their love for you. If the one smiling in question is a girl (especially if she is an Anime or Video Game character), her final smile will be the single most painfully cute thing you will ever see besides a box of kittens.

It makes a lasting impression as a pretty dignified way to go. Usually reserved for the finales of heartfelt stories or the climax of a Bittersweet Ending.

The Mercy Kill may have the dying person evince some self-awareness to show this; similarly, this might be part of Dying as Yourself.

If the character in question has been The Stoic or an Emotionless Girl it might be a case of Death Equals Emotion.

Compare Die Laughing, Died Happily Ever After, and Tearful Smile. Often paired with Pietà Plagiarism, Cradling Your Kill, or Comfort the Dying. See also Let Them Die Happy if the dying character is cheered up by well-meaning lies and Thanatos Gambit if the character is content to die in order to achieve some objective. See also Final First Hug and Last Kiss. Sometimes crosses with Out with a Bang. Unless the body dissolves or is destroyed, usually results in Peaceful in Death.

Contrast Dying Smirk, where characters die with spiteful or ironic (rather than peaceful) grins, smirks, and laughs.

NOTICE: It is possible that simply reading through the examples will be a Tear Jerker for the reader. It is recommended for those that easily get emotional that a box of tissues be handy. And it should go without saying that, being a Death Trope, THERE WILL BE UNMARKED SPOILERS.

Before Sae-byeok leaves the game, Ji-yeong thanks her with a smile on her face before facing her demise.

Before Sae-byeok leaves the game, Ji-yeong thanks her with a smile on her face before facing her demise.