Recap / Doctor Who 50th AS "The Day of the Doctor" 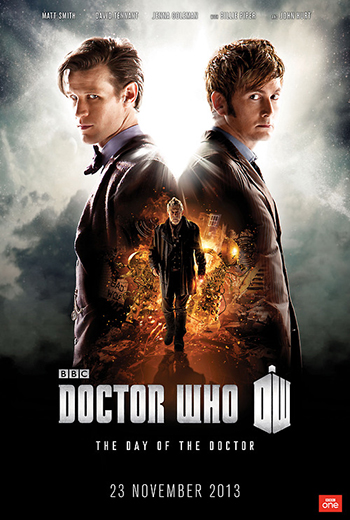 Looking for a Doctor? You've certainly come to the right place.
"Great men are forged in fire. It is the privilege of lesser men to light the flame."
— The War Doctor
Advertisement:

The one where the Doctor, the Doctor, and the Doctor confuse the polarity (and just in time for the big five-O).

The 50th anniversary special of Doctor Who, featuring Matt Smith, the return of David Tennant as the Tenth Doctor and Sir John Hurt as the Doctor's greatest secret, the War Doctor. This is the first proper Milestone Celebration story for the show since "Dimensions in Time" 20 years prior, the first canonical one since "The Five Doctors" a decade before that, and full-length multi-Doctor episode to be released since the show was revived. It is also the fifth televised multi-Doctor story, after "The Three Doctors", "The Five Doctors", "The Two Doctors" and minisode "Time Crash" (it's the sixth multi-Doctor special if you count "Dimensions in Time"). It was written by Steven Moffat.

In 2013, something terrible has awakened in London's National Gallery; in 1562, a murderous plot is afoot in Elizabethan England; and somewhere in space, an ancient battle nears its devastating conclusion. All of reality is at stake as the Doctor's own dangerous past comes back to haunt him.

The BBC simulcast the special without commercials in 94 countries.

This makes it, to date, the single biggest simulcast drama in the history of television, a fact confirmed by Guinness World Records in a presentation made to Moffat the day after the event.

This episode had two minisode prequels, "The Night of the Doctor" and "The Last Day". The novel Engines of War, released the next year, serves as a prequel to this. In 2018, BBC Books released a Novelization of this episode written by Steven Moffat which, among other things, answers some questions from the episode and includes updated versions of several scenes, including an appearance by the Thirteenth Doctor.