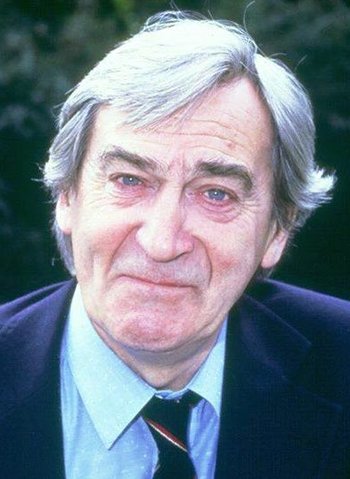 The little fellow.
"I believed totally in the possibilities implied by the series. I never thought of it as fantasy. Far from it."
Advertisement:

Patrick George Troughton (25 March 1920 – 28 March 1987) was an English actor, best known for playing the Second Doctor in the TV series Doctor Who. He was in the Royal Navy during the Second World War. He was the first actor to play the folk hero Robin Hood on television.

Troughton was known largely for his comedic roles before playing the Doctor, and thus decided to play the character differently from William Hartnell: the stern but caring grandfather was replaced by a clownish eccentric. This established a major factor to the show's popularity: the idea that regeneration not only changed the Doctor's appearance, but elements of his personality as well, allowing each actor who played the Doctor to put their own mark on the character. Hartnell fully endorsed Troughton's casting, reportedly saying that "there is one man in Britain who can take over [the role of the Doctor] and that's Patrick Troughton."

Troughton left the role after three years alongside co-stars Frazer Hines and Wendy Padbury out of fear of being typecast and from pressure from his wife note Hines has said that he believes, had Troughton not listened to his wife, we would still have the Second Doctor, Jamie and Zoe as the TARDIS team, even to this day. It would be over 40 years until the entire cast changed at once again. He retained a life-long affiliation with the programme, returning to play the Doctor three more times in various special episodes ("The Three Doctors", "The Five Doctors" and "The Two Doctors"). By extent, he is also the actor who reprised his role for televised multi-Doctor specials most often, beating runner-up Jon Pertwee ("The Five Doctors" and "Dimensions in Time" ) by one storynote other returning actors only appeared once; the First Doctor's appearances in "The Five Doctors" and "Twice Upon A Time" were respectively recast with Richard Hurndall and David Bradley in the part on account of Hartnell's death in 1975, two years after his spot in "The Three Doctors". Matt Smith, the Eleventh Doctor, cites Troughton as an inspiration for his version of the character, and it shows. Troughton advised Peter Davison to limit his time to three seasons in order to avoid being typecast as the Doctor, and the rule has since been followed by David Tennant, Matt Smith, Peter Capaldi and Jodie Whittaker (Davison's other successors left the role before three seasons for various reasons, mostly external circumstances). He spoke out in favour of a female incarnation of the Doctor many decades before the Thirteenth Doctor was cast.

He died of a heart attack at the Magnum Opus Con II Science Fiction convention in America, after ignoring the advice of his doctors who had told him not to go. He had two daughters and four sons. Many of his sons and grandsons have followed in his footsteps and become actors. His son David has made two significant Doctor Who appearances, as King Peladon in the Third Doctor story "The Curse of Peladon" and as Professor Hobbes in the Tenth Doctor episode "Midnight" (in addition to minor roles elsewhere throughout the series, the first two of which were during his father's tenure), whilst his other son Michael appeared in the 2014 Christmas special. David's son, Sam Troughton, is best known as Much in the 2006 BBC Robin Hood series. The son of Patrick's daughter Joanna (Don't bring up her father if you meet Jo as she had cut off all contact with him years before his death and they were never reconciled), Harry Melling, is best known as Dudley Dursley in the Harry Potter films. (Alice Troughton, who has directed several episodes of Doctor Who, is not a close relative of his.)

Works this actor has appeared in: