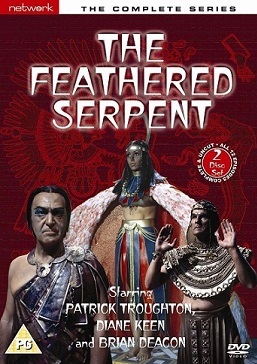 The Feathered Serpent is a British children's television series made for ITV by Thames Television. It was set in pre-Columbian Mexico and starred Patrick Troughton as Nasca, the High Priest of Teshcata. Two series were transmitted in 1976 and 1978.
Advertisement:

The series is set in ancient Mexico, when the peaceful god Quala is being usurped by the new and vengeful god, Teshcata; a power struggle ensues between the just Emperor Kukulkan (Tony Steedman) and the scheming High Priest Nasca (Troughton). With the new temple built and riddled with secret passageways, Nasca plots his ascension through betrayal, cunning and murder. With the arrival of the rival Toltec army, led by Prince Heumac (Brian Deacon), the Emperor sees a chance for peace by arranging a marriage to his daughter, Chimalma (Diane Keen). This creates tension with the rival suitor Mahoutec, General of the Jaguar Guards (Robert Gray), whose jealousy becomes a tool which Nasca exploits to his deadly advantage. It takes the courage of Heumac's messenger boy, Tozo (Richard Willis) and his blind mentor, the prophetic Otolmi (George Cormack), to find a way to defeat the powers of darkness.

The first series focuses on Nasca's play for power, which leads to the Emperor's murder, the shaming of Mahoutec, the slaughter of the Toltecs and the imprisonment of Heumac. But at the time of the eclipse, the tables are turned on Nasca as he meets his fateful end. Or does he?

The second series follows on directly with Chimalma now preparing her reign with a new ally in court, Mataque (Robert Russell). Meanwhile, Heumac undertakes a series of tests of courage, wisdom and ingenuity to prove that he would make a worthy husband. But Nasca's followers are plotting, and Xipec, Governor of the Gold Region (Granville Saxton), uses the magic of witchwoman, Keelag (Shelia Burrell), to bring the High Priest back to life.

This show provides the following tropes: