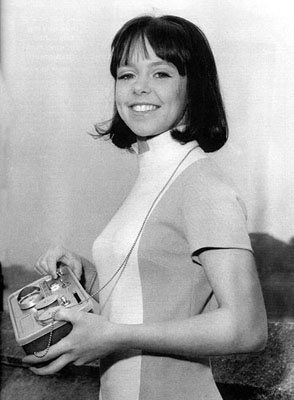 And here's Zoe, showing off the Zeerust-equivalent to the iPod.
Jamie: Just you watch your lip or I'll put you across my knee and larrap you.
Zoe: Oh, this is going to be fun. I shall learn a lot from you.
Logic, my dear Zoe, merely enables one to be wrong with authority.
— The Doctor delivers a Take That! to rival show Star Trek...
Advertisement:

The one with gyrating Cybermen.

Written by David Whitaker. This six-episode serial first aired from April 27 to June 1, 1968.

The Doctor and Jamie arrive on a spaceship and are attacked by a servo robot. Contacting a nearby space station, simply known as "the Wheel", they are rescued, but needless to say, more peril awaits.

The spaceship also releases some Cybermats which travel to the station and begin to prepare for an attack by the Cybermen. Meanwhile the Doctor and Jamie meet the crew, including a young teenage mathematical genius called Zoe Heriot. Some of the rest of the crew are being hypnotically controlled by the Cybermen, and the Doctor sends Jamie and Zoe to fetch a piece of phlebotinum from the TARDIS which will allow him to beef up the station's laser enough to destroy the approaching cyber-fleet.

Zoe stows away on the TARDIS, but is discovered by the Doctor who asks if she really wants to come with them, and shows a clip of a previous adventure to demonstrate the dangers. She still seems keen, so they agree to let her come alongnote on the original broadcast, this was followed immediately after by a re-run of "The Evil of the Daleks" in its entirety, with linking narration by Patrick Troughton and Wendy Padbury establishing that this is meant to be the full extent of what the Doctor showed Zoe.

The first ten minutes of it were reconstructed in (colour) animation in 2018, as an audition piece for the animators of "The Macra Terror", and can be found on that DVD.