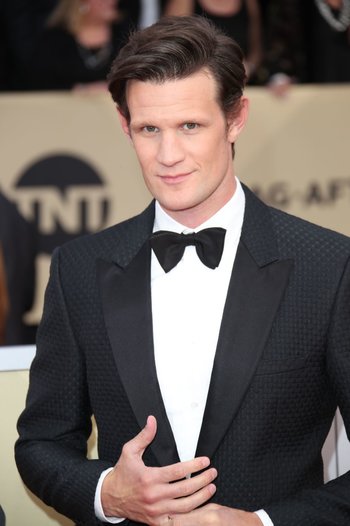 Matthew Robert Smith (born 28 October 1982 in Northampton, England) is a British actor from The Midlands. He aimed to be a professional footballer, but a back injury put an end to that, and he went into acting instead.

Smith appeared in the National Theatre production of The History Boys, which was also made into a film, but not with him in. On TV, he appeared as Jim Taylor in two adaptations of the Sally Lockhart novels, alongside Billie Piper in the title role. He also appeared alongside her in Secret Diary of a Call Girl, which should make for some... interesting fanvids in the years to come.

However, "Matt Smith (XI)", as he's listed on IMDb, was catapulted into the UK national consciousness on January 3, 2009, when the BBC announced that he would be playing the Eleventh Doctor in Doctor Who. Aged 26 when cast, he was at the time the youngest person to ever play the role, taking the record from Fifth Doctor Peter Davison, who was cast at 29. He's actually still the youngest actor to date even chronologically speaking, as Peter Capaldi is several decades older and even Jodie Whittaker has him beat by a few months.

Naturally, this was the fourth time he appeared on a show or TV special that Billie Piper had been on (and with the 50th anniversary special, the fourth time they'd worked together).

Shortly after the announcement, he was seen in the BBC2 three-part drama Moses Jones, a murder mystery set in London's Ugandan community, as DS Dan Twentyman.

Like Peter Davison, he succeeded a beloved, loud, eccentric, and unbelievably popular Doctor, was the youngest Doctor at the time of his entry onto the series, and was followed up by an actor who shared a name with a previous Doctor and had appeared on the show before. He did spectacularly well at it as well.

Extremely clumsy, as Moffat has related — just as Moffat was proposing to Piers Wenger (fellow executive producer) to run a book on how long Smith would take to break the sonic screwdriver prop, the prop man walked past...

Not much of a fan to begin with (both he and Karen Gillan grew up in the period between 1989 and 2005 when the show was off the air), he started watching the old stories and became a big fan of Patrick Troughton. (He called up Steven Moffat in the middle of the night to spend twenty minutes raving about "The Tomb of the Cybermen", then asked for a bow tie.) To get a feel for his character, he wrote Fan Fiction with the Doctor meeting Albert Einstein.

He has the same name as a presenter on ITV's football coverage, and over sixty cast and crew members (including eleven actors) according to IMDb.

Not well-known for his musical skills, he is nevertheless an accomplished keyboardist — and was, for one brief, shining moment, the third member of Orbital, actually playing the Doctor Who theme live at Glastonbury

to play the Doctor. It's one of the reasons why he and Karen Gillan get on so well: they're both utterly mad!

On 1 June 2013, over the sound of fangirls everywhere sobbing enough tears to double Britain's annual rainfall, he announced that he would be leaving the show

at Christmas. "It's been an honour to play this part, to follow the legacy of brilliant actors, and helm the TARDIS for a spell with 'the ginger, the nose, and the impossible one'. But when ya gotta go, ya gotta go and Trenzalore calls. Thank you guys."

Smith took his last bow as the Doctor on 25 December 2013, handing the reins to Peter Capaldi as the curtain closed on the Eleventh Doctor's tenure and the clock struck Twelve.

Since leaving the show, Smith has been in a wide variety of projects. Most recently he's received plenty of acclaim for playing a young Prince Phillip in The Crown.