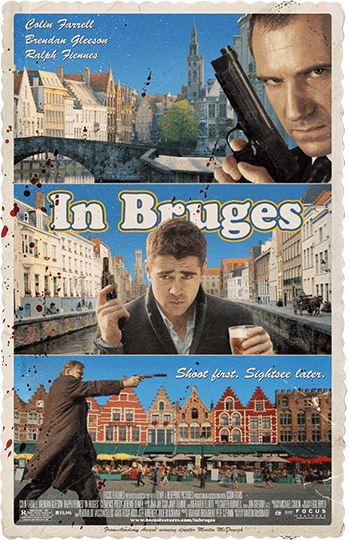 ...it's in Belgium.
"...Fucking Bruges."
— Everyone in the entire film
Advertisement:

In Bruges is a 2008 tragicomedy about two Irish hitmen hiding out in Belgium. Ray (Colin Farrell) is a rookie with a foul mouth, a fouler disposition, and a bizarre obsession with "midgets". Ken (Brendan Gleeson) is an experienced professional with intellectual interests and curiosity about the medieval city's history (though he's no slouch in the profanity department). They spend their days exploring the city, waiting for their even more foul-mouthed boss, English gangster Harry (Ralph Fiennes), to call them and tell them what to do next, all the while providing much witty commentary about beautiful-but-boring Bruges.

And then everything goes to hell.

The film is the first directorial effort of by British/Irish theatre director/playwright Martin McDonagh.