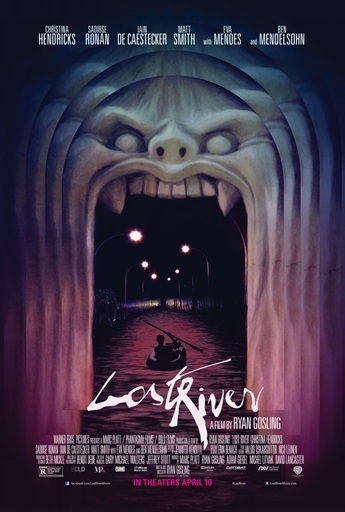 Lost River is a Fantasy/Neo-Noir…Thing written and directed by Ryan Gosling and starring Christina Hendricks, Iain De Caestecker, Matt Smith, Saoirse Ronan, Eva Mendes and Ben Mendelsohn. The “plot” could reasonably be summed up as follows: In an initial setup resembling a Neo-Dickensian fairy tale, Billy (Hendricks) struggles to provide for her sons in downtrodden Detroit. Her son Bones (Caestecker) spends his days collecting scrap copper while trying to avoid Bully (Smith) who controls the area. Billy eventually works for a murder-themed burlesque house while Bones finds out about Lost River, a city that was flooded when a reservoir was built. Bones is told by his neighbor Rat (Ronan) that if he breaks off a piece of land and brings it to the surface, the “curse” cast over the land will end.

The film premiered at Cannes in 2014 to almost universally negative reviews, to the point where rumors spread that the film’s distributor Warner Bros. was selling the film to another company. Eventually, the film was released via a limited release/VOD plan. note  It opened in three theaters in the entire US.