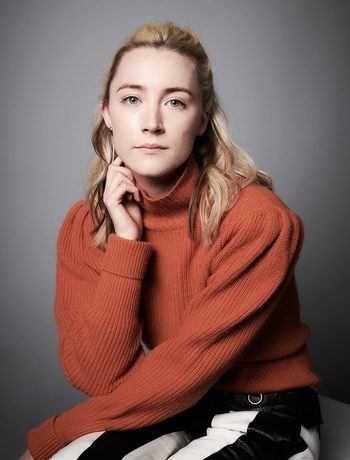 Saoirse Una Ronan (born April 12, 1994 in the Bronx, New York City) is an Irish-American film actress.note "Saoirse" is the Irish Gaelic word for "freedom". While the name is most commonly pronounced "seer-sha", Ronan herself pronounces it "sur-sha", to rhyme with "inertia"; this is one of several regional variations in how the name is pronounced, and for Irish people is an immediate indication of Ronan's upper-middle class Dublin background.

She debuted in a short arc on The Clinic but it was her role as an apologetic younger sister who commits a misguided act with tragic consequences in Atonement that marked her as a star to watch; it netted her an Academy Award nomination at the age of thirteen. She's also well-known for her leading roles in The Lovely Bones, Hanna, Brooklyn, Lady Bird, and Little Women. She received Oscar noms for the last three as well.

She's been known in recent years for her portrayal of mature characters who come of age. They are seldom Irish.

Tropes applying to her works and roles include: