Film / The Loves of Hercules 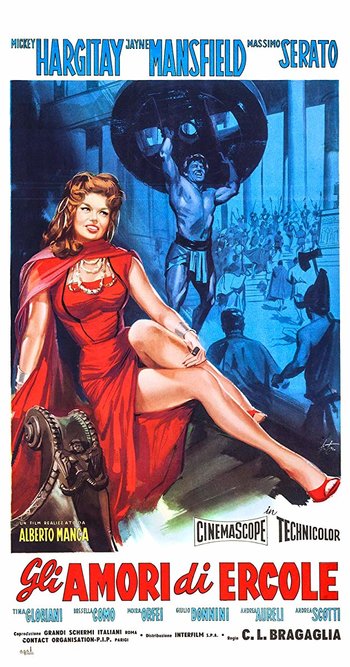 While Hercules is away, his people and the woman he loves are killed by the king of Ecalia. Hercules goes to Ecalia to avenge his dead. When he arrives in Ecalia he finds that the king is dead and Queen Deianera reigns. He saves her and falls for her, but Deianera has been promised to Acheloo. His efforts then get entangled with a conspiracy led by Licos, the head of Deianera's armies, along with encounters with the Amazons, the Hydra and other monsters...

The film was made during a period where Jayne Mansfield's numerous tabloid scandals had made her persona non grata in Hollywood, and she resorted to doing several quick and cheap movies in Italy until it blew over. It was featured in Season 11 of Mystery Science Theater 3000; for that episode go here.