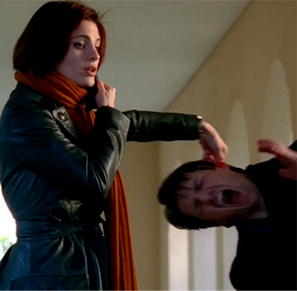 Sometimes it's the only way to deal with a writer.
Willow: The coroner's office said she was missing an ear. So I'm thinking, maybe we're looking for a witch. There's some great spells that work much better with an ear in the mix.
Buffy: That's one fun little hobby you've got there, Will.
Willow: Or maybe an ear-harvesting demon that — it's, like, building another demon completely out of ears. Or... Ooh! Thought! We're just assuming someone else cut off the ear. What if it was self-inflicted, like van Gogh?
Buffy: So... she brutally stabs herself, dumped the body, then cut off her own ear?
— Buffy the Vampire Slayer, "Pangs"
Advertisement:

This trope describes damage or painful actions done to the ears:

Compare Eye Scream, for similar nasty things happening to a character's eyes, Tongue Trauma when it's the tongue that bites it, or Fingore and Agony of the Feet, when the targets are the fingers and toes.

Example of:
Pull a Rabbit out of My Hat