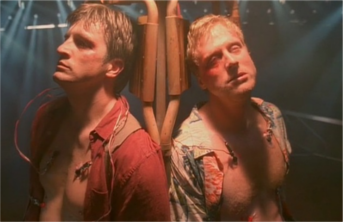 "Now we get to meet the real you."
—Mr. Niska
Advertisement:

Wash is a little irked by the bond Mal and Zoe share. She has known Mal for longer than she's known Wash; she trusts him implicitly, she follows his orders almost without question, and they are often recounting war stories from their time spent working together. This twinge of jealousy comes to a head just as the crew is almost finished fencing the medical supplies from the Ariel job. Mal and Zoe intend to make the rendezvous together, but Wash intervenes and forces Mal to take him along instead.

On the other side of the planet in an orbiting space station, Adelai Niska finds out from a source that Malcolm Reynolds is nearby. He dispatches a team, who kill Mal's buyers and take him and Wash hostage. When the pair don't return to Serenity on time, Zoe, Jayne, and Book check the scene and are able to discern exactly who took them. Zoe decides to pool together everyone's extra money in an attempt to buy back their men from Niska, and flies to the station to conduct the deal personally.

Meanwhile, Wash and Mal argue in Niska's torture room, with particular emphasis on Zoe's unconditional support of Mal's decisions. Mal objects, saying that she married Wash against his direct order. Niska arrives to begin the torture session, and Mal realizes that if he can keep Wash angry at him and engaged in the argument, he will have a better chance withstanding the pain.

Zoe arrives and offers Niska the deal. He says that the sum is too small to release both men, but his Sadistic Choice is cut short when Zoe picks Wash in half a second flat. Out of spite, Niska sends her back with Mal's left ear. Wash praises Mal's resolve and tireless anti-torture argument therapy, and Zoe plots her next move.

The crew stages an attack on the space station, led by Zoe and Jayne and held up in the rear by Book, who shoots out soldiers' kneecaps to disable them non-fatally. Wash plays a role by flying Serenity into the station airlock with the engines off, avoiding sensor detection. Simon and Kaylee also attempt to help in the firefight but are rather useless with firearms. Kaylee is pinned down by three soldiers, only to be saved by River, who glances briefly at them, closes her eyes, and fires three times, killing them all. The attack is sufficient to draw out Niska's assistants, giving Mal the opportunity to escape. Niska gets away, but so does the crew, and Simon is able to reattach Mal's ear without lasting harm.

Zoe stops Jayne from interfering in the fight at first, believing that Mal needs to handle it himself. Mal, it turns out, has zero interest in that.

Example of:
This Is Something He's Got to Do Himself

Zoe stops Jayne from interfering in the fight at first, believing that Mal needs to handle it himself. Mal, it turns out, has zero interest in that.