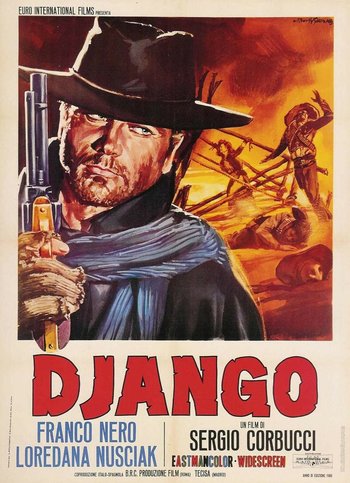 A Spaghetti Western from 1966 directed by Sergio Corbucci starring Franco Nero as Django (the D is silent), an Old West gunfighter who drags a coffin behind him wherever he goes. Pretty standard set-up: mysterious, badass stranger comes to town, shoots a lot of bad guys, and plays two groups of outlaws against each other, all in search of revenge and/or money. It had a reputation at the time for being one of the most violent movies ever, though by modern standards it's nowhere close.

It inspired a number of other Spaghetti Westerns that also used the word "Django" in their titles, Italian copyright law being pretty lax on stuff like that. It had one proper sequel, Django Strikes Again, starring Nero and directed by Nello Rossati. Another, Django Lives! directed by John Sayles, is perpetually rumoured to be in production. And much later, it inspired both Sukiyaki Western Django and Quentin Tarantino's Django Unchained, which featured a cameo by Franco Nero. Django even had a Crossover with Sartana in 1970's Django Defies Sartana.