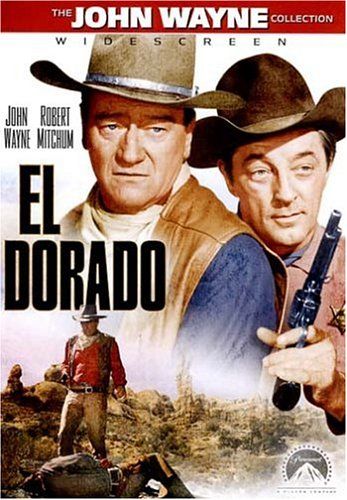 "And as his strength
Failed him at length,
He met a pilgrim shadow—
'Shadow,' said he
'Where can it be—
This land of Eldorado?'"
— Edgar Allan Poe, "Eldorado"
Advertisement:

El Dorado is a classic 1966 Western directed by Howard Hawks, written by Leigh Brackett (who adapted the screenplay from the novel The Stars in Their Courses by Harry Brown), and starring John Wayne, Robert Mitchum, and James Caan.

Famed gunfighter Cole Thornton (Wayne) comes to the small Texan town of El Dorado, hired by carpetbagger cattle baron Bart Jason (Ed Asner), and stays at the hotel owned by Maudie (Charlene Holt). The town's sheriff, J.P. Harrah (Mitchum), is an old friend of Thornton and warns him off: Jason wants to start a war with his neighbors, the MacDonald family, over water rights, and the MacDonalds are the rightful owners. Taking the hint, Thornton rides out to Bart Jason's farm and tells him the deal is off because he does not want to go up against Harrah. In the meantime the MacDonalds have heard about Jason's intentions, and as Thornton passes their territory, he is shot at by one of the sons, Luke MacDonald. Cole Thornton shoots back in self-defense, hitting Luke MacDonald in the stomach; the pain is too much for the boy, who commits suicide with a revolver Thornton overlooked. He brings the body to the MacDonald homestead and tells the family what happened, but Luke's tomboyish sister Joey (Michele Carey) will have none of it and shortly afterwards bushwhacks him as he rides back to El Dorado. Thornton survives and overpowers Joey MacDonald, but it is discovered that her bullet is lodged against his spine and the local doctor is not good enough to extract it without risking his death or paralysis. So after he is healed enough to ride, he leaves town and his friends J.P. and Maudie, promising to return when he can face the MacDonalds again.

A few months later, Cole Thornton reappears in a small town on the Mexican border. In a local cantina he witnesses a young man, Mississippi (James Caan), approaching a group of tough guys and challenging one of them. The man is the last of four men who had killed an old gambler, his surrogate father, and Mississippi wants revenge. The man's boss, gunslinger Nelse McLeod (Christopher George), is intrigued and watches, because Mississippi does not carry a gun. In a duel across the table, Mississippi manages to kill his opponent with a thrown knife before he can shoot. Thornton then saves Mississippi's life by shooting the gun out of the hand of another of MacLeod's men who now wants to avenge his late comrade. Impressed by his quick draw, MacLeod offers Thornton the dead man's place in his outfit for his next job — a range war in El Dorado. It should not be too difficult, he says, the only person who could interfere is the local sheriff, and he now is too drunk to shoot straight. Thornton politely refuses.

Grateful towards his lifesaver, Mississippi follows Thornton who the next morning sets off to El Dorado to aid his friend and because of his blood debt towards the MacDonalds. He witnesses Thornton falling off his horse as the moving bullet partially and temporarily paralyses him, and offers his help. Since Mississippi is a completely useless shot, Thornton at first refuses, then sees to it that he buys a sawn-off shotgun. The two make it to El Dorado ahead of McLeod's group; Maudie tells them that J.P. came to his sorry state after falling for a bad woman passing through town. With the help of Mississippi's hangover recipe they manage to sober J.P. up somewhat, but they still have to face McLeod's and Bart Jason's men heavily outnumbered: a gunslinger in constant danger of being laid low by the bullet nudging his spine, a recovering drunk sheriff, a useless shot, and crusty deputy Bull Harris (Arthur Hunnicutt)...

"Over the Mountains
Of the Moon,
Down the Valley of the Shadow,
Ride, boldly ride,"
The shade replied,—
"If you seek for Eldorado!"