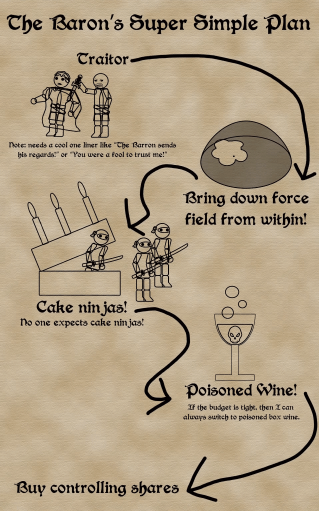 Stark: What's the vibranium for?
Ultron: I'm glad you asked that, because I wanted to take this time to explain my evil plan...
[Ultron shoots Stark with his concussion blasts]
— Avengers: Age of Ultron
Advertisement:

You've got your Big Bad Evil Overlord, looming over the world like a colossus, but he can't just putz around on his throne or hang out in his gym all day long waiting for heroes to kick his ass. While The Omniscient Council of Vagueness doesn't seem to do much but sit around and wait while spouting off cryptic nonsense, they've got to have some sort of hidden agenda to hide or there isn't much of a point.

So they've got to have a plan; an evil plan. Otherwise there's not much of a story, is there? This trope is the reason Villains Act, Heroes React; the villain needs to be doing something evil or the hero has no evil to thwart.

Some popular examples of Evil Plans:

Normally, these are accomplished with Stock Evil Overlord Tactics. Most of the smaller-scope plans can usually be accomplished in a less grandiose fashion but super villains often have Complexity Addiction.

Can involve a Xanatos Gambit but ONLY if the evil plan is arranged so that whatever the heroes do helps the villain in some way. See the trope page for details.

If the plan is poorly thought out, it could be a Missing Steps Plan.

If you are looking for the webcomic called Evil Plan, go here.

Zuko reveals that his father, Fire Lord Ozai, intends to use the power of Sozin's Comet to rain fire down onto the Earth Kingdom, burning it to ashes.

Zuko reveals that his father, Fire Lord Ozai, intends to use the power of Sozin's Comet to rain fire down onto the Earth Kingdom, burning it to ashes.