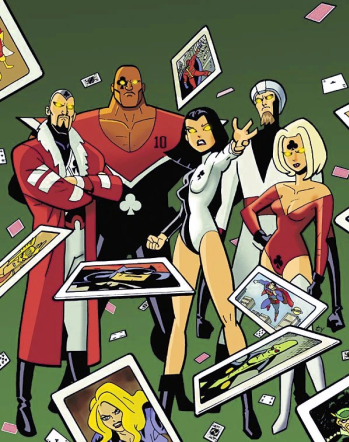 This is a generally villainous organization with mysterious goals and many distinct characters, usually wearing theme outfits. May start out as The Omniscient Council of Vagueness before getting more time in the spotlight. Unlike a Legion of Doom, they're generally introduced as a bunch of new characters, rather than being a new alliance of old foes. Larger than a Quirky Miniboss Squad, and treated much more seriously (less quirk, more Boss). While they may have access to or be associated with a Nebulous Evil Organization, they are generally not nebulous, but rather have a set number of members, though they may qualify if their influence is nebulous or if they have numerous underlings who do not qualify as full members. They also tend to become a Spotlight-Stealing Squad.
Advertisement:

The Standard Evil Organization Squad generally serves as either the Big Bad or Co-Dragons on a large scale (or both, since the leader is often the true Big Bad), and thus are generally a major threat. The Team is the vaguely-structured Good Counterpart.