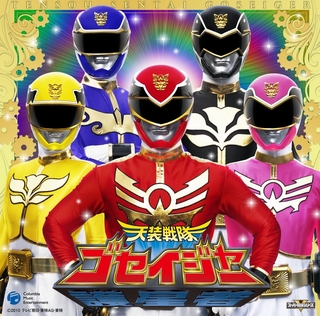 "Guarding the Planet is an Angel's duty!"
Advertisement:

Tensō Sentai Goseiger (Celestial Armament Squadron Goseiger)note Tensō means "heavenly cloth" or "celestial armament", while the name "Goseiger" is a portmanteau of goseija (planet guardian) and "ranger" is the 34th program in the Super Sentai series, airing from 2010 to 2011.

Long ago, humanity split off into a new group calling themselves the Gosei Angels. From their home plane of Gosei World, the Gosei Angels have used the power of their magic "Gosei Cards" to protect humanity in secret for generations.

In the present day, a alien race known as "Warstar" has descended upon the Earth in the name of conquest, destroying the Tower of Heaven that acts as the gateway to Gosei World. Now the only hope of humanity rests with five fledgling Gosei Angels who have been stranded on Earth: the Goseigers.

As time goes on, the Goseigers learn what it truly means to protect the Earth, and face a number of escalating threats: the mysterious creatures known as "Yuumajuu", the calculating and robotic "Matrintis" faction, and a dark secret from the past of Gosei World.

Elements of the show were adapted into the first half of Power Rangers Megaforce, while elements of its successor, Kaizoku Sentai Gokaiger, formed most of the second half, Super Megaforce.