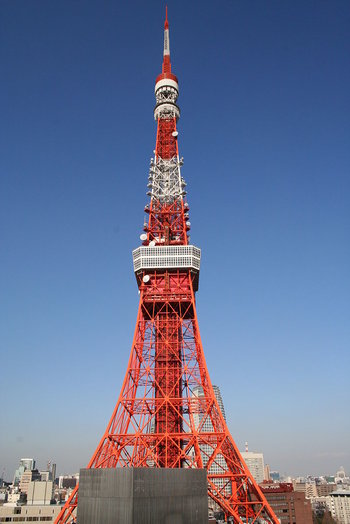 The Japanese built a rough copy of the Eiffel Tower in Tokyo in the 1950s as a tourist attraction and for TV and radio broadcasting. It's clearly visible from most of town, and is a frequent destination for class trips from local schools. (It is also sometimes referred to as "Touto Tower"note Which makes for a Department of Redundancy Department, as the name Touto is made up of tou for "Tokyo" and another tou for "tower", so it'd become "Tokyo Tower Tower".)

Apparently, they built the thing out of Imported Alien Phlebotinum, because it's also a major Weirdness Magnet — at least in fiction, where it's often subject to Monumental Damage. If the Big Bad or The Dragon are going to attack, they'll attack the tower at the precise moment that the protagonists are visiting it. If the Ordinary High-School Student and her friends are going to be sucked into another dimension, it'll happen while they're visiting Tokyo Tower. Kaiju and Robeasts seem to knock it over or blow it up on a regular basis, and even if they don't, they usually come to visit the location on their way through. The government might secretly turn it into a superweapon. In fact, Livin' and Lovin' In The Anime Universe: A Basic Guide

warns, "Try to stay away from Tokyo Tower. It appears to mark an inter-universal nexus."

With all the suffering and destruction that happens there, it's a wonder that anyone is permitted near it...

Alternately, if the tower isn't the scene of the disaster, it will be just about the only thing left standing, instead.

It appears that the reason for its ubiquity is a combination of two powerful story compulsions: the need that spy characters (like James Bond) have to fight on the Eiffel Tower every time they visit Paris, and the fact that Tokyo Is the Center of the Universe.

Since Tokyo Tower is not high enough to broadcast digital television signals over the same area thanks to tall buildings getting in the way, a new tower has been constructed to supplement it: the "Tokyo Skytree

", which opened its doors in May 2012. At 634 meters it is nearly twice as tall as its illustrious predecessor, and even though it has not been around for nearly as long, it seems set to gradually join Tokyo Tower's place as an icon in anime.

The top was bent by a powerful earthquake on Friday, March 11th, 2011.

Examples other than the Tokyo Tower itself

Tokyo Metropolitan Government Building / City Hall
Tokyo Skytree
Tokyo Big Sight
One of the newest additions to the Tokyo skyline, it is a massive convention center that consists of four inverted, flat-tipped pyramids arranged in a square formation, sitting on top of pillars that the "tops" of the pyramids rest upon. It was originally designed to be one of the facilities that the 2020 Olympics events would take place in, but funding cuts nixed this idea; instead, it was to serve as the main broadcasting and press center for the 2020 Olympics...until said 2020 Olympics were cancelled due to the COVID-19 Pandemic. Amongst fans of anime and manga, it's best known for being the site of Comic Market, or "Comiket" for short, a major biannual festival for Doujinshi creators to sell their works. As such it is always seen in any otaku-related series, or in single episodes of other series centered about Comiket.
National Diet Building
If you see that squarish government building with a pyramid on the top in anime or tokusatsu, it symbolically means the Japanese government itself; the National Diet Building is where Japan's Parliament meet. In this way, it is the equivalent for example, the United States' Capitol or the British palace of Westminister. It was constructed from 1920 to 1936, and has seen many revisions in its design.