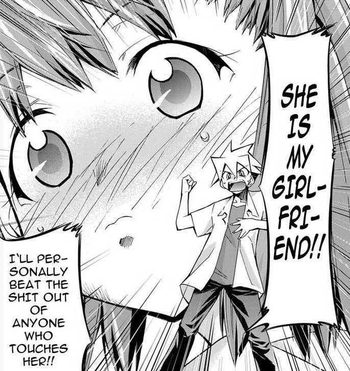 In this story, it's revealed that all of the wars fought over the past 30 years were part of a Masquerade to keep the public in the dark about an Alien Invasion. The nations of the world are fighting the enormous alien monsters with a number of superpowered creatures called Category D's. One of these is Mana Eimiya, a 49.46-metre-tall girl whose job is to periodically come out of hiding and beat up incoming aliens, apparently with just her bare hands.

Problem is, she's fallen head over heels for a guy 40 times shorter than her - a boy named Makoto Tobita with spiky hair and an obsession with chivalry and being overprotective of girls. Can this unlikely relationship work?