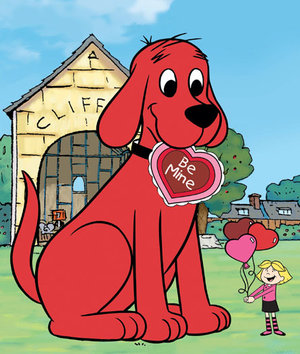 He got that way with lots of love.
YoshiFan300: Yoshi + Giant hacks = Cute Godzilla
theyoshifanboy: So True :) Though in my opinion, the bigger they are, the cuter they are :3
— The comments to this

Cuteness is often associated with smallness, but sometimes characters or creatures can look cute despite, or even partly because of, how big they are. This is the essence of the cute giant.

Of course, cuteness is not so much about size as about various physical traits that are hard to pin down. Nevertheless, the association of cuteness with a giant does end up seeming contradictory.

Compare/contrast with Gentle Giant, but remember, some giants can be cute but not gentle, or gentle but not cute.

See also Canis Major and Mega Neko, examples of which tend to double as this for obvious reasons. A Giant Woman can often be this as well.

The adorable giant Pooky just wants to play games with Emmy, but she is too small for them.

The adorable giant Pooky just wants to play games with Emmy, but she is too small for them.