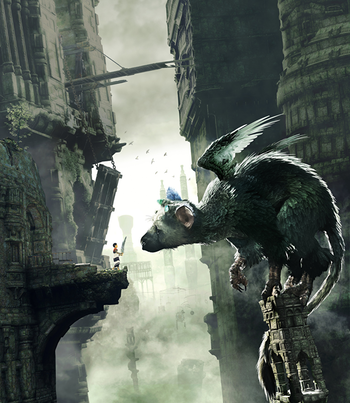 If you're going through hell, keep going.
In my memories, the monster always has kind eyes.
— TGS 2016 trailer

The Last Guardian is an adventure game, and the third work by Team ICO. This one tells the story of a young boy who awakens in a dark cavern, with no knowledge of how he got there. To his shock, sleeping next to him is a giant feathered griffin-like beast named Trico, chained to the floor and injured. Though the beast is initially hostile, the boy is slowly able to free it and win its trust - and, eventually, to work together.

They'll need to. The boy quickly discovers that he's in the midst of an enormous ruin known as the Nest: a gigantic complex of towering structures and interconnecting walkways, walled off by mile-high mountains and built above a gigantic abyss. If the boy has any hope for escape, he will need Trico's help in not only traversing these crumbling ruins, but also for protection. Magically-possessed suits of armor inhabit many of the Nest's significant structures, and will try to capture the boy on sight. Only Trico can keep the boy safe from them...and from even more dangerous foes.

Team Ico began developing the game in 2007, and was announced at the 2009 Electronic Entertainment Expo with a planned release in 2011 exclusively for the PlayStation 3. Unfortunately, the game suffered many delays and a generation jump. The development was later hampered by Ueda's departure from Sony in December 2011, along with many staff of Team Ico, effectively meaning the team no longer exists. However, Ueda and other former Team Ico members created a new studio: genDESIGN. This studio decided to finish the game and opted to commit themselves to helping Sony complete it through contract and working alongside Sony's internal Japan Studio.

After this lengthy production cycle and several delays, the game was released for the PlayStation 4 on December 6, 2016.

"And that is how it ended — our extraordinary story."