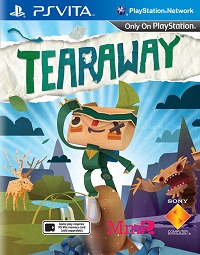 No glue required.
Tearaway is a Playstation Vita 3D Puzzle Platformer by Media Molecule featuring a papercraft artstyle and gameplay elements influenced by the front and rear touch screen (such as trampoline pads that bounce the character when they are tapped on the rear touch screen, or even let the player tear up the floor and appear to stick their finger into the game world).
Advertisement:

It stars one of two messengers named Iota or Atoi, and they need to deliver a package to the player. Unfortunately, their idyllic papercraft world is overrun by monsters called "Scraps", so they need to slog through various levels and get to the end where a device is waiting that will let them send the message to the player (such as a catapult that will launch them and the message into the sun, where the player's face appears).

Throughout the game, players can unlock various papercraft projects that they can upload to their computers for printing.

An Updated Re-release, Tearaway Unfolded was released on September 8, 2015 for the PlayStation 4.