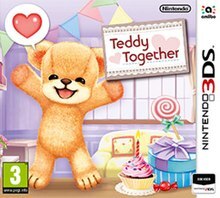 Teddy Together (original Japanese title: Kuma-Tomo) is a Virtual Pet Video Game by Arika for the Nintendo 3DS.

The game has you receiving a brand new Teddy Bear in the mail. Upon opening the box, the bear comes to life, and displays the personality of a small child. The object of the game, from then on, is to interact with the bear: answering his questions, making food and feeding him, in general raising him. Whatever he learns he can put down in his notebook.

The game was released on June 20th, 2013. A Japan-only sequel featuring cute kittens instead of teddy bears was released later for 3DS and Nintendo Switch.

Teddy Together contains examples of: