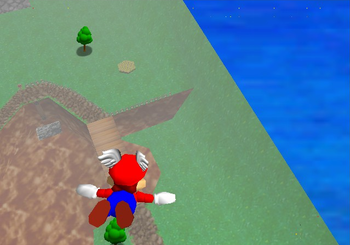 Super Jumping is a common ability in video game worlds, and even the lowliest platforming hero is commonly capable of a Double Jump, but flight is comparatively much rarer: few video games actually let your character fly freely about the world. From a design standpoint, this makes sense. After all, if your character can fly anywhere, what's to stop them from flying to distant parts of the level and completely avoiding all the obstacles you planned for them? And even worse: How do you keep them from flying off the edges of the level (or world map) without having to rely on Invisible Walls?

However, ignoring the obvious Flight Simulators (and many an aerial dogfighting game), there are still games that let your character fly freely through the wild blue yonder, but for the sake of gameplay and level design they will usually impose one or more of the following limits:

Not to be confused with VideoGame.Flight.